Thanks for subscribing to Cache - a weekly summary of the most important stories, trends, & commentary in eCommerce marketing, curated by Rob Bettis.  Last week’s issue had a 35% open rate.  Share this issue with a friend.

Amazon has been in the spotlight lately due to the prevalence of counterfeit and fraudulent products in their marketplace.

But oddly, one of their strongest competitors has flown under the radar despite their own dark history with slimy retail practices.

The Strange Brands in Your Instagram Feed - The Atlantic

It all started with an Instagram ad for a coat, the West Louis (TM) Business-Man Windproof Long Coat to be specific. It looked like a decent camel coat, not fancy but fine. And I’d been looking for one just that color, so when the ad touting the coat popped up and the price was in the double-digits, I figured: hey, a deal!

The brand, West Louis, seemed like another one of the small clothing companies that has me tagged in the vast Facebook-advertising ecosystem as someone who likes buying clothes: Faherty, Birdwell Beach Britches, Life After Denim, some wool underwear brand that claims I only need two pairs per week, sundry bootmakers.

Perhaps the copy on the West Louis site was a little much, claiming “West Louis is the perfection of modern gentlemen clothing,” but in a world where an oil company can claim to “fuel connections,” who was I to fault a small entrepreneur for some purple prose?

Several weeks later, the coat showed up in a black plastic bag emblazoned with the markings of China Post, that nation’s postal service. I tore it open and pulled out the coat. The material has the softness of a Las Vegas carpet and the rich sheen of a velour jumpsuit. The fabric is so synthetic, it could probably be refined into bunker fuel for a ship. It was, technically, the item I ordered, only shabbier than I expected in every aspect.

I went to the West Louis Instagram account and found 20 total posts, all made between June and October of 2017. Most are just pictures of clothes. Doing a reverse image search, it’s clear that the Business-Man Windproof Long Coat is sold throughout the world on a variety of retail websites. Another sweatshirt I purchased through Instagram—I tracked down no less than 15 shops selling the identical item. I bought mine from Thecuttedge.life, but I could have gotten it from Gonthwid, Hzijue, Romwe, HypeClothing, Manvestment, Ladae Picassa, or Kovfee. Each very lightly brands the sweatshirt as its own, but features identical pictures of a mustachioed, tattooed model. That a decent percentage of the brands are unpronounceable in English just adds to the covfefe of it all.

All these sites use a platform called Shopify, which is like the Wordpress or Blogger of e-commerce, enabling completely turnkey online stores. Now, it has over 500,000 merchants, a number that’s grown 74 percent per year over the last five years. On the big shopping days around Thanksgiving, they were doing $1 million in transactions per minute. And the “vast majority” of the stores on the service are small to medium-sized businesses, the company told me.

Shopify serves as the base layer for an emerging ecosystem that solders digital advertising through Facebook onto the world of Asian manufacturers and wholesalers who rep their companies on Alibaba and its foreigner-friendly counterpart, AliExpress.

It’s a fascinating new retail world, a mutation of globalized capitalism that’s been growing in the cracks of mainstream commerce.

As the barriers of entry lower, abuse rises. And if you are not already familiar with this underground world of AliExpress drop-shipping, get-rich-quick subculture, it is rampant.

You can get a great overview of this industry from Reply All’s episode, “The World's Most Expensive Free Watch.”

So why is Shopify flying under the public pressure radar while Amazon takes all of the heat?

I think we can point to several reasons:

But in the meantime, we have to compete against these fly-by-night retailers - both in the ad auctions and the minds of consumers. 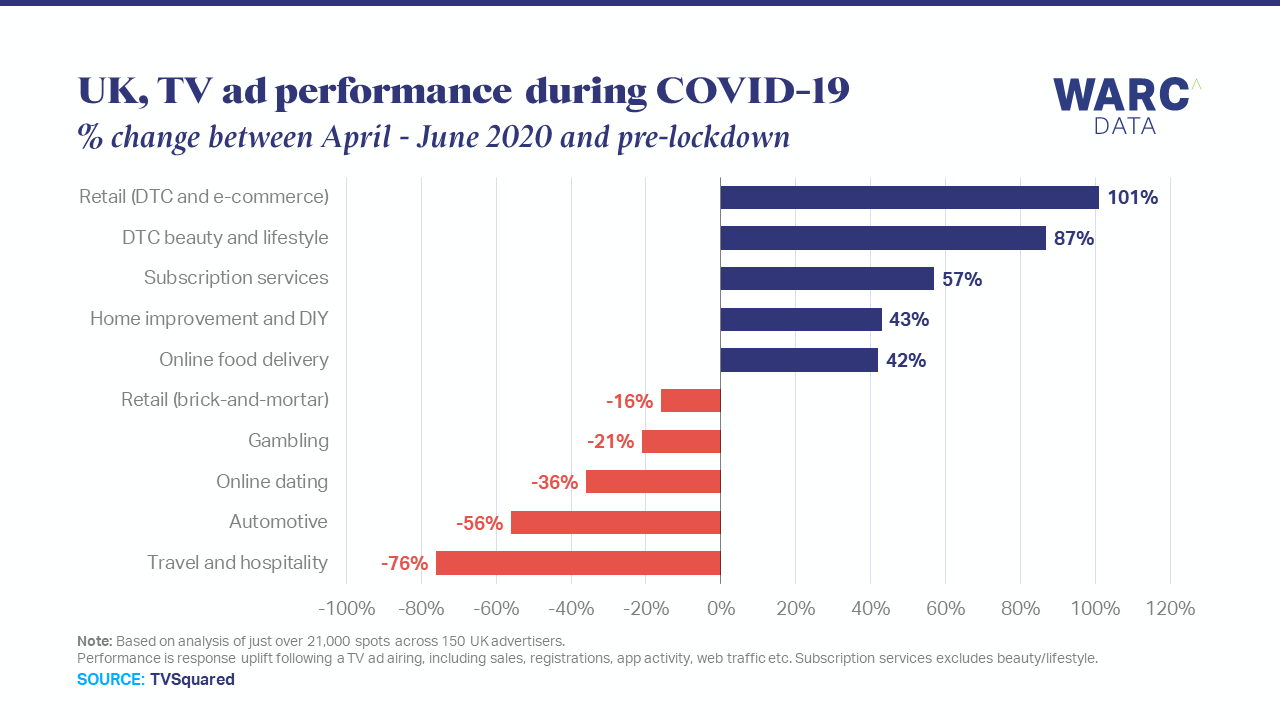 In recent years, there’s been a shift in how advertisers are thinking about TV – starting to use it as a performance marketing channel. DTC and travel companies were some of the first to look at TV as an alternative to Google, according to Calum Smeaton, CEO and co-founder of TVSquared, using the channel to drive a response, from visiting a website or downloading an app all the way through to sales.

But the COVID-19 lockdown brought changes to TV viewing habits and advertisers’ spending priorities. TVSquared’s analysis of ad performance by sector shows that, unsurprisingly, travel and hospitality has been hardest hit, while retail (in the form of DTC and e-commerce) has seen performance double.

Adhering to the president’s penchant for focusing attention on himself during major Democratic events, the Trump campaign will be taking over the banner of YouTube for 96 hours starting on Tuesday, the second day of the convention, an expensive and far-reaching digital gambit.

The campaign will also blanket the home pages of The Wall Street Journal, The Washington Post and FoxNews.com with Trump campaign ads. Even non-D.N.C. programming will be inundated with Trump ads, as the campaign has bought premium, or “unskippable,” ads on sites like Hulu.

The campaign amounts to “high-seven figures,” a significant sum to spend online in such a short period of time, and could top $10 million based on the engagement metrics of some ads (a few digital ads are sometimes charged extra based on engagement). The takeover of the YouTube banner and the news sites’ home pages are national buys, while the spending for Hulu and others will be in swing states.

Setting the political nature of this post aside, many advertisers have seen CPC’s jump this week, as the auctions are flooded with $10 million in ad spend over a 4 day period.

Interestingly, when Democrats rescheduled the convention originally scheduled for July, they did not similarly reschedule their media buys.

Biden campaign officials said that they have consistently spent money for ads on Hulu, and said that they are investing their money in more strategic ways on YouTube, consistently focusing on targeted states. They said their own data indicates spending after a major event matters more, and that the Biden team has reserved time on YouTube for the day after the Republican National Convention ends on Aug. 27.

So inflated CPC’s may drag out into next week too, if not until Election Day.

Here Is The Only Good Pricing Strategy For Luxury Brands

So what is the right pricing strategy? The right approach is to take a step back and remember why consumers ever paid a premium for the brand in the first place. The answer is simple: You would only pay a premium if you got more value compared to another alternative. For luxury brands, only a fraction of the total value is provided by the product. Other factors, mostly intangible and hidden ones, drive values dramatically higher. The magnitude of this “Added Luxury Value” (ALV) can be mind-blowing. We found categories in which the top-tier brands generated ten-thousand times more value than brands in the same categories that only provided functional value.

Most managers never calculate ALV. So, intuitively, they believe that ALV is a relatively small part of the brand’s equity, which they assume is mainly driven by the product or service. Consequently, they think a discount promotion won’t have much impact on their brand’s perceived value. But think again! If the largest part of any perceived value is driven by intangibles, then discounting a luxury item is directly destroying ALV. And rebuilding an intangible once it’s destroyed is nearly impossible.

Pricing, therefore, first has to start with building an extreme value creation model. Brand executives have to generate clarity about what exactly they’re selling. What is driving ALV for their brand? Why should a customer consider them? What is the competitive advantage — not thanks to the product but because of the brand positioning? Brands must look at the big picture where the customer at the center.

Patrick Green, who runs an eBay store that sells golf clubs, told The Wall Street Journal nearly half of his USPS shipments since May have been late, with roughly a quarter of deliveries taking more than a week to arrive at their destinations. “These delays lead to a ton of extra work for me,” the Connecticut-based analytics consultant told the newspaper. “When I see an item has arrived in five days, I consider that lucky.”

In July, USPS delivered 91.6 percent of first-class and priority mail packages on time. That’s the lowest rate since the pandemic started, when the rate was 91.1 percent, according to ShipMatrix Inc., which analyzes shipping data.

Service improved after the USPS added an additional day to some delivery commitments in late April, but it has not yet returned to pre-pandemic levels, according to ShipMatrix. The firm said 93.8 percent of parcels arrived on time between Aug. 2 and Aug. 12.

Behind the Wild and Sometimes Wacky Facemask Economy

Never before has hiding your face in public been so fashionable or lucrative for small businesses.

When the number of Covid-19 cases spiked and health advisories began to include wearing masks in public, production of personal protective equipment skyrocketed. A June report by Allied Market Research finds the global PPE market grew by more than $1.5 billion in the past 12 months, which includes the onset of the pandemic. It's predicted to increase to $33.4 billion by 2027, from $12.9 billion in 2019, with North America accounting for the lionshare of the uptick.

The report specifically cites the wearing of facemasks among the general public as a primary growth driver, which is all too evident in paging through any website with banner ads. The surge in interest has created dizzying opportunities for craftspeople and businesses.

If "masks" were a separate product silo at Etsy, they would constitute the third-largest sales category on the site (behind home goods and jewelry), at $346 million in the second quarter of this year. During the pandemic, 112,000 Etsy vendors have cashed in on mask sales, and 4 million people have visited the site exclusively to buy face coverings.

Outdoor Retailers Go Virtual With Events During The Pandemic

From “Lunch ‘n Learns” with brand ambassadors, to Instagram Live and Zoom-based experiences that teach fun facts to kids learning from home, to even a free live stream online called YETI+ (which is video footage of actual outdoor streams), the brand is working to provide its audience a taste of the outdoors while stuck inside. 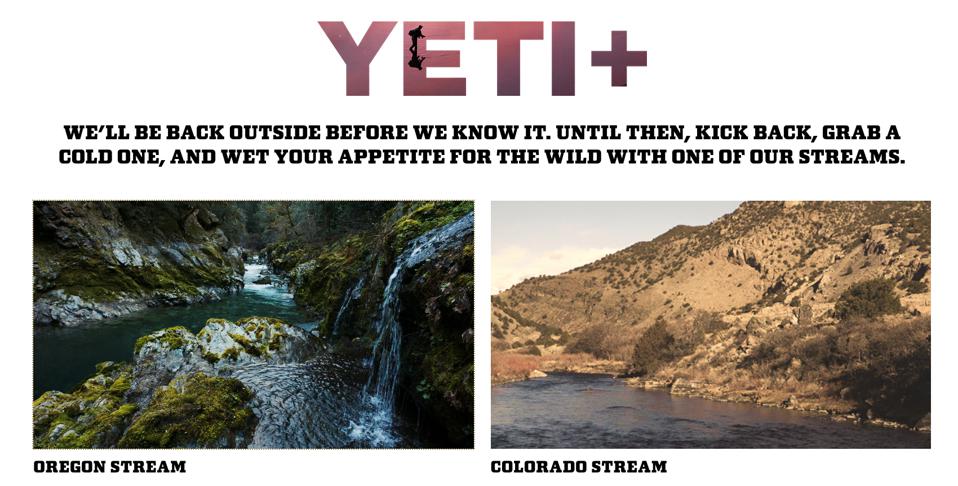 Cloth of gold - Why the economic value of a face mask is $56.14 | Finance & economics | The Economist

Calculations from Goldman Sachs, a bank, suggest that a 15 percentage-point rise in the share of the population that wears masks would reduce the daily growth of cases by about one percentage point. That obviates the need for lockdown measures that would otherwise subtract nearly 5% from GDP. The Economist took those calculations a step further. According to our reckoning, an American wearing a mask for a day is helping prevent a fall in GDP of $56.14. Not bad for something that you can buy for about 50 cents apiece.