Thanks for subscribing to Cache - a weekly summary of the most important stories, trends, & commentary in eCommerce marketing, curated by Rob Bettis.

Last week’s issue had a 40% open rate. Share this issue with a cranky, old neighbor.

Shopping managers should keep a close eye on Google Merchant Center in the coming weeks:

Google has announced that the image policy enforcement in Google Merchant Center is no longer going to be on the account-level and will switch to item-level disapprovals. So disapprovals will be on a more granular basis going forward.

Google explained "over the next few weeks, as a part of a gradual rollout, any accounts that are currently warned or under preemptive item disapproval due to image promotional text will be automatically overturned, and item-level disapprovals will be applied to affected products instead."

Google announced yesterday that you no longer need to use Google Merchant Center to communicate your shipping details in the product search results. Now you can use new shipping detail schema markup to do the same thing.

Google wrote "starting today, we support shippingDetails schema.org markup as an alternative way for retailers to be eligible for shipping details in Google Search results."

This schema is aimed at helping searchers see shipping costs and estimated delivery timeframes based on the searcher's location and your company's shipping policies. Shipping details can appear in the overview and stores tabs in Google Search for a specific product result. To be eligible for this enhancement, add OfferShippingDetails structured data. For more examples on how to model free shipping, multiple services, and regions you don't ship to, review the Shipping details best practices.

I would be shocked if this schema markup doesn’t become a requirement for Shopping Campaigns within five years.

In its blog post Google said, “[A]dvertisers can upload their first-party, privacy-safe transaction data to inform ongoing optimization.” There are multiple ways to deliver store sales data to Google. Google Analytics reports “the total number of conversions influenced by your ads;” it doesn’t connect in-store sales to “individual ad clicks, viewable impressions, or people.” This bidding option will typically only be available to large, multi-location retailers with sufficient order volumes.

Google would like all of the data, please and thank you.

BTW, can you tell Shopping is Google’s focus at the moment?

This Deal Helped Turn Google Into an Ad Powerhouse. Is That a Problem? - The New York Times

But its financial heft — the source of nearly all its enormous profits — is advertising. And perhaps no day was more pivotal in transforming Google into a powerhouse across the entire digital advertising industry than April 13, 2007, when the company clinched a deal to buy DoubleClick for $3.1 billion.

The deal turned out to be “a total game changer, a crucial piece in the larger jigsaw puzzle Google put together,” said Timothy Armstrong, a former Google executive who championed the acquisition.

It has also turned out to be a classic example of why a growing number of antitrust experts say lawmakers need to broadly rethink how mergers are regulated when the buyer is a tech company with strong and growing market power.

Google’s ad business is now a focus of wide-ranging investigations by the Justice Department and state attorneys general. The scrutiny includes whether the company choked off competitors, or shortchanged advertisers and publishers, and how it assembled its ad empire, including DoubleClick, an ad technology company and marketplace.

The Justice Department is expected to file an antitrust suit against Google by the end of the month. It is unclear whether the case will be focused on the ad business, or concentrate on renewed allegations that Google’s search algorithm gives preference to its shopping and other commerce services and hobbles rivals.

The Facebook Ads Manager tools have been a hot mess over the past month or two. That story theme continues this week, as David Herrmann sympathizes:

Despite continually breaking all of their tools for advertisers, there was some positive news coming out of the Facebook camp this week:

Amazon-owned streaming platform Twitch is opening up its inventory to advertisers through Amazon Advertising, allowing them to promote their brands to its “hard-to-reach and highly engaged audiences.”

Twitch has a leading position as the go-to platform for gamers either streaming or watching gaming live streams and e-sports. Now, it’s adding more value to its ads business by opening up its ads inventory to many more advertisers through Amazon Advertising.

Marketers worldwide tend to prefer advertising on established digital platforms such as YouTube, contrasting with consumer sentiment that's generally more positive about advertising they see on newer platforms like TikTok, Kantar found in a study shared with Marketing Dive. Social video app TikTok was No. 1 globally in Kantar's ranking of consumer preferences for digital ad platforms, followed by Instagram, Snapchat, Google and Twitter.

If you are keeping score at home:

+1 for video (note the previous issue on the streaming wars)

-1 for Facebook, which is notably absent from this article. 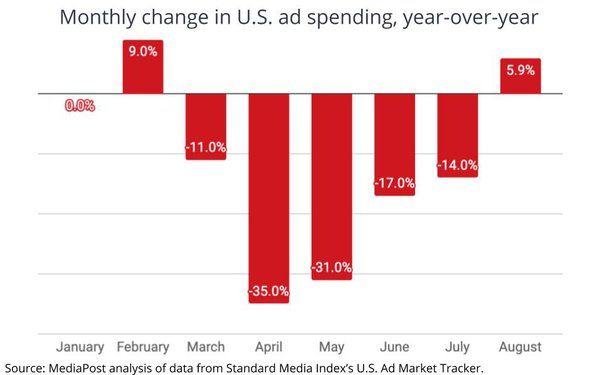 The U.S. advertising marketplace grew 5.9% in August -- its first monthly year-over-year expansion since March, when the effects of the COVID-19 pandemic put the brakes on many forms of ad spending.

The data affirm projections of many analysts that the U.S. ad recession would bottom out during the summer and would begin to rebound heading into the fourth quarter.

Bankrupt retailers that are permanently closing their stores could collect a windfall if prepaid gift cards are never redeemed. Roughly $2 billion to $4 billion, or up to 4%, of gift cards typically go unused every year in the U.S., according to research from Mercator Advisory Group Inc.

Some smart speakers, video doorbells and other hardware manufacturers hit roadblocks when trying to buy advertisements in search results.

A report, published by The Wall Street Journal, cites Amazon employees and executives at rival companies and advertising firms.

“Amazon has barred competitors from selling certain devices on its site entirely,” per sources.

“News flash: retailers promote their own products and often don’t sell products of competitors,” Amazon spokesman Drew Herdener wrote in a statement to the WSJ. He told the media outlet that Walmart refuses to sell Amazon brands such as the Kindle, Fire TV, and Echo.

B. Should we start a GoFundMe for Drew? It sounds like he could use a vacation.

Google Shopping is one of the most popular platforms for consumers shopping online, with many shoppers beginning their purchase journey with a Google search. But as consumer preferences skew toward supporting local and independent businesses, Google has updated its Shopping function to allow for greater filtering and more relevant search results.

The addition of a “Nearby” filter on the Google Shopping results page is designed to highlight the retail options within a specific radius of the user’s location. Alternatively, shoppers can add the words “near me” to their search, in order to automatically pull up the results that are available in their area. When combined with the “Discover” feature, which spotlights smaller retailers, this can be used to locate local businesses.

Half of holiday shoppers plan to use curbside or contactless pickup: survey | Retail Dive

Half of the respondents said they plan to use curbside or contactless pickup during the holiday season compared to last year, according to the survey. Among the top items on shoppers' lists are clothing (50%) and home goods and smart devices (39%).

If you don’t have a way for customers to buy without setting foot in your store, it’s (past) time to get busy!

For thousands of small-business owners across the country who rely on the Postal Service — many of whom had to pivot almost entirely to e-commerce in the wake of the pandemic — the damage has already been done. An internal USPS document obtained by Supply Chain Dive shows the extent of the delays, which postal workers say are ongoing. The document says that workers may “temporarily … see mail left behind or mail on the workroom floor or docks” at the end of a shift, a departure from the standard practice of getting everything out as soon as possible. Some postal workers told the website that Amazon packages are being prioritized, putting small businesses at yet another disadvantage.

“It’s impacting reviews — [small businesses] are getting negative reviews because things are taking a really long time to arrive,” Molly Day, the vice president of public affairs for the National Small Business Association (NSBA), told The Goods. “They shipped it as soon as they got the order, and it’s a week, two week, three weeks later that people are getting it.” Consumers have gotten used to Amazon-style near-immediate shipping, something that’s both expensive and logistically difficult for small businesses to accomplish even in the best of times. Now that people feel less comfortable buying things in person, having orders arrive late is particularly devastating.

Helping Creators and Publishers Manage Their Intellectual Property - About Facebook

We want to ensure Facebook is a safe and valuable place for creators to share their content. That’s why we built tools like Rights Manager in Creator Studio to help creators and publishers who have a large or growing catalog of content better control when, how and where their content is shared across Facebook and Instagram. Today, we are introducing Rights Manager for Images, a new version of Rights Manager that uses image matching technology to help creators and publishers protect and manage their image content at scale. 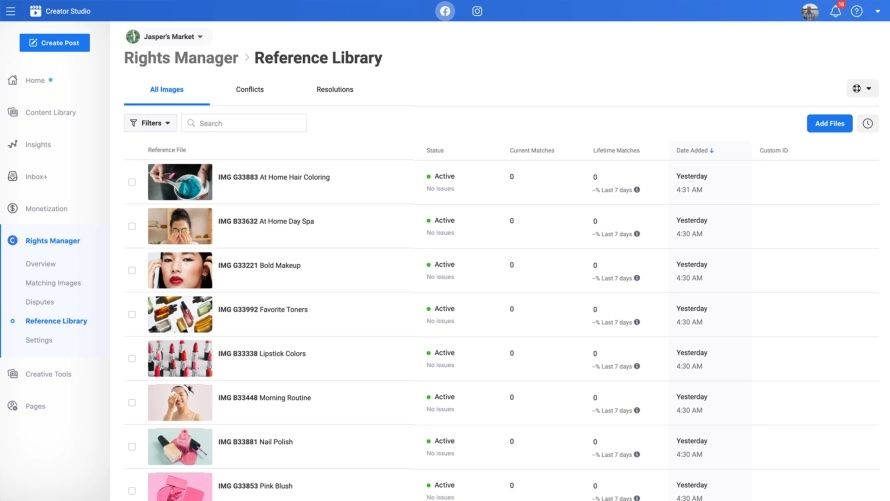 Take advantage of intelligence‑backed creative tools, a visual automation builder, more e‑commerce functionality, and our updated app designed to help your business grow alongside your ambitions.

Mailchimp, now with a healthy dose of AI.

Google is shutting down paid Chrome extensions - The Verge

Google is shutting down paid Chrome extensions offered on the Chrome Web Store, the company announced today. That means that developers who are trying to monetize their extensions will have to do so with other payment-handling systems.

As of Monday, developers can no longer make new paid extensions, according to Google — though that’s cementing a policy that has already been in place since March.

The Ring Always Home Cam Flies Around Inside Your House | WIRED

When any kind of disturbance in your home is detected, the drone will launch from its dock and fly to where the incident is—say, if there’s an intruder, or a raccoon, Limp suggests. It’s all part of Amazon’s larger strategy to have its singular products plug in and fly and rotate and simply appear where you need them to be, similar to the way the voice assistant Alexa started to show up, well, everywhere. Amazon’s been at this for a while now. The drone may be coming from inside the house, but it should also come as no surprise.