sharecropper: a tenant farmer especially in the southern U.S. who is provided with credit for seed, tools, living quarters, and food, who works the land, and who receives an agreed share of the value of the crop minus charges

In 2007, Facebook released Ads. Folks who poured significant time and attention into growing their brand on Facebook where instantly exposed as sharecroppers. Their audience was not their own, rather Facebook’s audience.

In the time since, the pendulum has swung in the opposite direction, with the reemergence of blogs, email lists, and standalone stores, retailers cultivated their own land (albeit digital) and wisely avoided the middleman, connecting directly with their customers.

This week, with the launch of Facebook Shops (more on that later), there is a new shadow figure in this discussion - a new potential middle man through which brands can repeat the mistakes of yesteryear.

The challenge of eCommerce retailers is focus. As advertisers, we need the discipline to avoid ‘the new hotness’ and maintain our direct connection with customers.

After all, I t was only a few short weeks ago when Amazon’s COVID-19 response kneecapped thousands of independent brands that leverage Amazon for distribution at the same time brick and mortar also failed them. It was a harsh reminder of the virtues of farming your own land.

While it is impossible to completely avoid the middlemen of the internet, we can (and should) keep them at arm’s length. May our strategies be so brave.

The overall timeline still technically remains a 30 day process, but they have amended what happens in that time frame.

Previously, it was a straight 30-day timeline.

Businesses would be notified of their need to submit verification, and if it wasn’t submitted within that 30 days, ads would stop running.

The new refinement in this window still make the whole process a 30-day timeline, but businesses now have 21 days to submit the verification.

If they do not submit verification within 21 days, they will then receive a 7-day warning before ads stop running.

The new verification initiative was announced literally one month ago. The fact that the details around it are already changing is interesting. This has been a common occurrence with Google recently. I wonder why one hand so often doesn’t know what the other hand is doing until it is in the news. 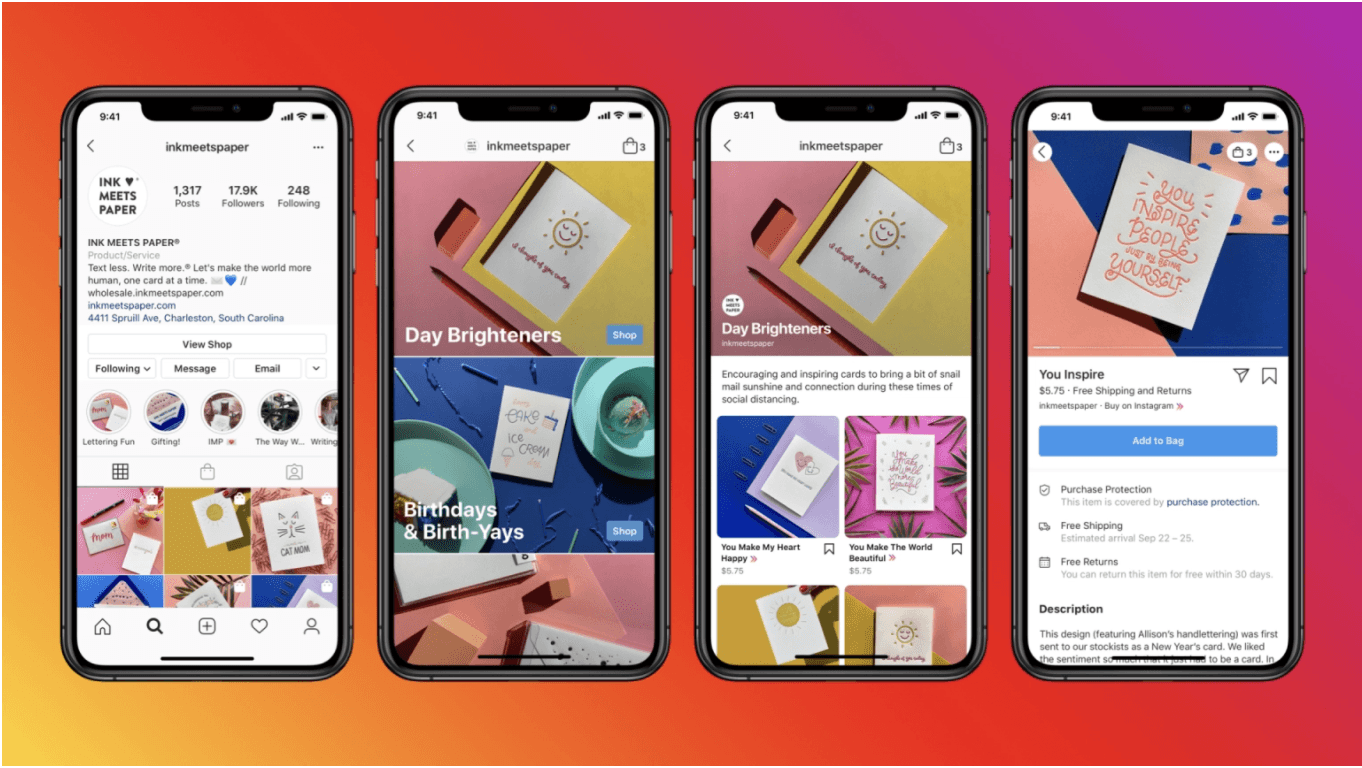 Those businesses will be able to create a Facebook Shop for free — they just upload their catalog, choose the products they want to feature, then customize it with a cover image and accent colors. Visitors can then browse, save and order products.

Facebook’s vice president of ads Dan Levy said that while the company will charge “small fees” on each purchase, the real monetization will come from driving more advertising. (Shops can also be featured in ads and stories.)

Levy described this as a “build once and render anywhere” solution, with Shah adding that “the shop itself will be very consistent, whether it’s on Facebook or Instagram.” What will differ is how consumers discover the shops, whether it’s via the Facebook Marketplace or a product tagged in a photo on Instagram.

I hope I am not reading too much into this announcement. But I could see a day when Facebook advertisers are strongly encouraged to drive shoppers to checkout on Facebook Shops instead of the retailer’s site.

Also, if you read last week’s issue of Cache, it is hard to overlook how Facebook is letting advertisers use staged images in this product feed driven shopping experience…😳

Somewhat unrelated to the product itself, I loved watching Shopify’s stock during the announcement.

Oh, but then we learned that Shopify had partnered with Facebook for Shops.

Quite a day for Shopify stockholders.

Before you Tweet, you’ll be able to choose who can reply with three options: everyone (standard Twitter, and the default setting), only people you follow, or only people you mention. Tweets with the latter two settings will be labeled and the reply icon will be grayed out so that it’s clear for people if they can’t reply. People who can’t reply will still be able to view, Retweet, Retweet with Comment, and like these Tweets.

Of the hodgepodge of features that trickle out of Twitter, this is on the useful end of the spectrum. I will be curious to see how brands adopt this into their Twitter strategy.

Instagram has today launched a new ‘Guides’ option for profiles, which will enable selected business users and creators to highlight recommendations, tips, and other content in a new, dedicated tab. 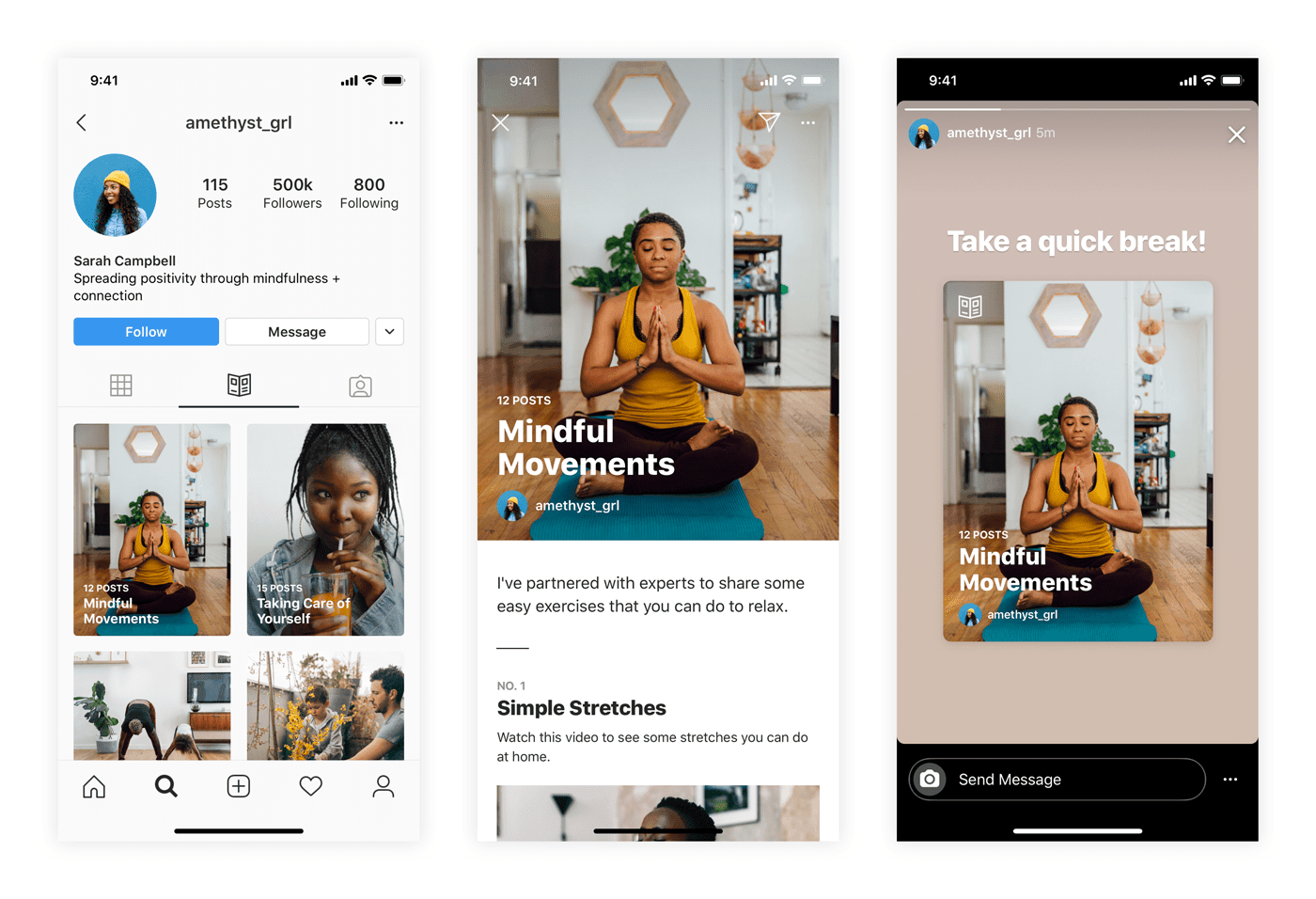 As you can see in the above sequence, chosen partner profiles will now display a new tab - in addition to ‘Posts’, ‘Mentions’ and ‘IGTV’ listings - on their profiles. The Guides tab will highlight collections of posts under dedicated topic tiles - which has a Pinterest-like feel to it.

Today, we’re excited to introduce an entirely new feature called shopping spotlights that bring the expert recommendations of influential fashion and home tastemakers as well as publishers directly to you. In addition to editors’ picks, you will be able to easily shop curated ideas based on current Pinterest trends. Recent trends like tie dye, terracotta home accents, and intergalactic makeup are now fully shoppable on Pinterest thru shopping spotlights. With the feel of a personal stylist and the look of an editorial magazine, shopping the latest trends as well as product picks of your favorite influencers and magazines has never been easier. 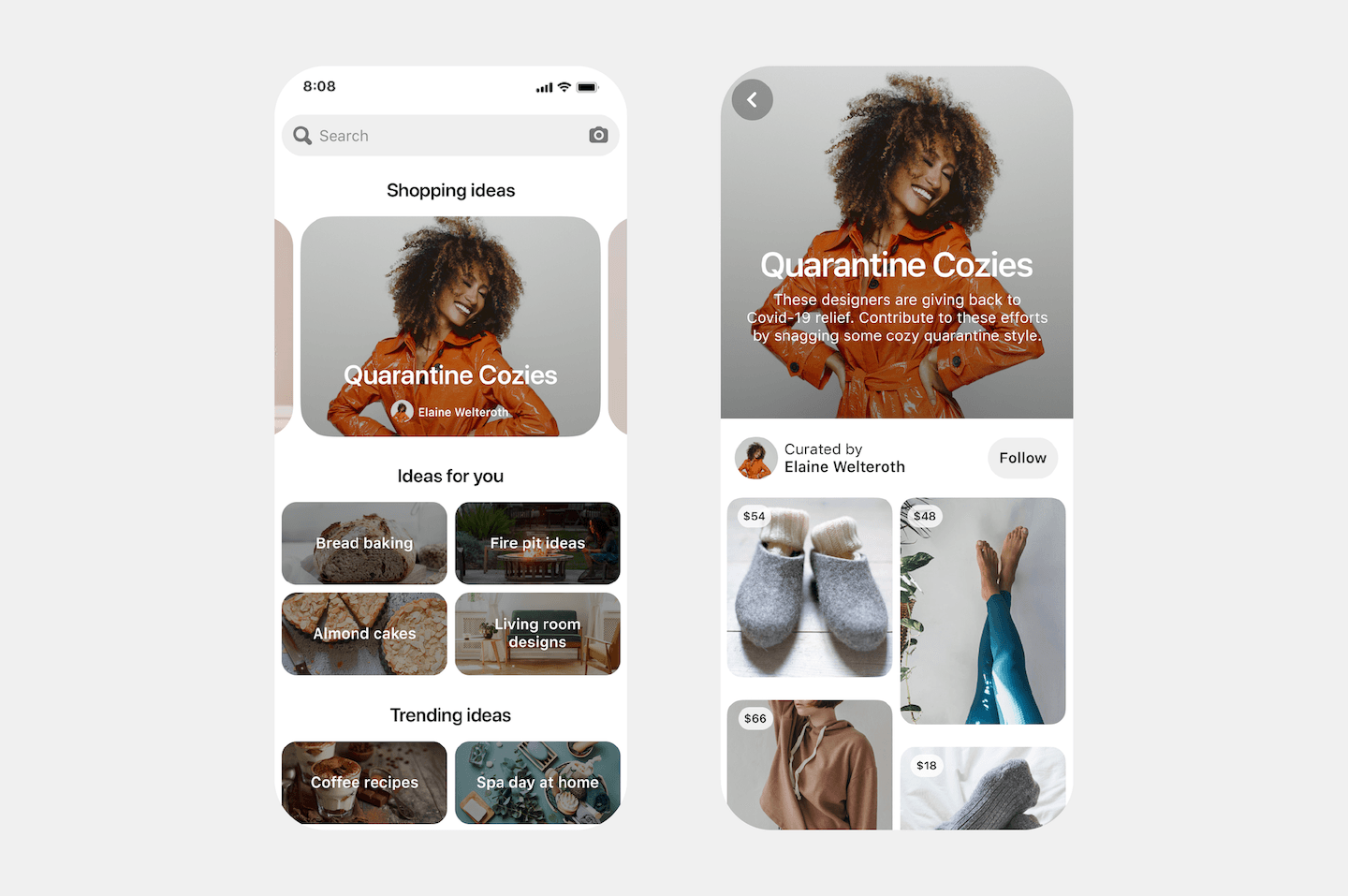 • There are no limits on things like music in Stories, or traditional musical performances (e.g. filming a live artist or band performing) • The greater the number of full-length recorded tracks in a video, the more likely it may be limited (e.g. a stream may be interrupted, parts of your video could be muted, or it could be removed entirely) • Shorter clips of music are recommended • There should always be a visual component to your video; recorded audio should not be the primary purpose of the video

This has TikTok written all over it.

“It’s going to be an extremely difficult time for many of them. There is no way to candy-coat it,” Stephens said.

The big retail businesses that had fundamental weaknesses already at play — low brand equity, significant debt or too much reliance on physical stores for distribution — are the ones most in danger of being closed forever, he said.

And until there is a vaccine, they won’t be able to return to normal because of the need to prevent crowding and the possibility of re-openings followed by pandemic flare ups and more shutdowns, so they’ve got to change quickly, Stephens said.

It is striking just how important a front door has become. Boutique retailers with nontraditional brick & mortar often (at least in my part of the country) have a street entrance. But the very thing that previously brought value to strip malls and shopping centers is now its greatest weakness.

Sally Seston, founder of Retail Category Consultants in Toronto, said it doesn’t take long for people to adapt to change.

“It takes about three weeks for something you try as a new idea to start [to] become a habit,” she said.

“We have been forced to do much, if not all, of our shopping online for more than three weeks, so consumers are getting used to that convenience, or being able to shop whenever they want with a broad range of comparison across different merchants.”

I think the longevity of this pandemic as a driver in behavioral change is an understated story for retail. Its one thing to close your eyes, pinch your nose, and do something you do not want to do. It is an entirely different thing to do that two, three, or four times in a row.

Can Amazon Save Luxury Fashion?

But while a handful of participating designers praised the store’s curation and the Vogue of it all, the Amazon storefront still looks a lot like Amazon. Details and information on garments is scant; images are limited; and the display has all the glamour you would need when buying a nail clipper, but not much more. “Feels like a major Amazon roadblock if this is how they continue to showcase luxury product,” Caroline Issa, the editor and street-style regular, tweeted. Storytelling, such as it is, is minimal. You can shop “editors’, picks,” in themes like florals, bohemian, and neutral, but the rarified air of luxury stores and even luxury e-commerce sites is harder to replicate.

The USPS Is Reviewing Delivery Fees for Amazon, Fedex, and More

According to the Washington Post, over the last few weeks the USPS has been seeking bids from consulting firms to reexamine what the agency charges companies like Amazon, UPS, and FedEx. Contracts are generally reviewed on a yearly basis, and analysts have repeatedly warned that suddenly raising package prices that drastically would cause more bad than good, not just for the USPS or Amazon, but for small businesses and individuals too.

Package shipments account for 5 percent of the USPS’ volume, but 30 percent of its revenue. Since the pandemic has shuttered cities all over the country, package volume has increased by 70 percent. However, a deep drop in personal and marketing mail has cut revenue by a huge amount, and the increase in package shipments has been unable to account for that loss. As of now, the USPS is on track to lose $13 billion by the end of this year.

Everything We Announced at Shopify Reunite 2020 — Shopify News

To keep you up to date on the latest Shopify product information, we’ve put together this overview of Reunite’s biggest announcements. If you missed today’s broadcast, you can also watch the recording.

This week, Shopify had a virtual version of his annual Unite conference. There is several nice, new additions to the Shopify toolbox. If you run your store on Shopify, I encourage you to check out the whole list.

Having watched the announcements live, I could not help but notice a theme that has also recently been oozing out of Apple’s Keynotes - big brands drinking too much of their own Kool-Aid.

The Shopify rundown was a mix of things their customers care about and things that just make Shopify more money. The latter was packaged as something that should excite consumers, but in reading the virtual room, I don’t think it landed that way. Especially in the financial category, a few of the announcements felt more like fleecing than finance - but without a room of Apple retail employees to get the applause started.

With presets for so many social media placements, this is a very helpful utility for managing your brand’s social.

We monitor webpages… so you don’t have to!

A helpful tool for those who like to keep a close eye on a competitor.